The municipality of Arnuero is located in the Cantabrian’s oriental coast, 43 km far from Santander and an altitude of 45 meters. She has a surface area of 25.4 km2 . This municipality is composed by main populated areas like Castillo, Arnuero, Soano and Isla. This last area is the most important.

The scenic wealth of this municipality is the result of the diversity shown by a montain area: mid-and low-mountain areas, valleys, unobstructed coastal areas with abrupt variations,beaches,marshes, meadows and forests.

A bit of history

The current townhall was formed by the natural disaggregation of the Junta de las Siete Villas (that they belonged to the local population of this countries, between the XVcentury) and because she was integrated into a incomparable historical and artistic heritage, specific to the Cantabrian region, Merindad de Trasmiera.

From the second half of the 16th century until the 17th century, its appears some cantabrian famous singers, which is considered as a major economic activity with greatpotential for the territory. The Arnuero’s neighbours have focused on stone work architects, those from Isla like bell foundry workers, those from Castillo like cabinetmakers and gilders, and those of Soano, like ringers.

The most important illustrious character was D. Juan Fernández de Isla, who boosted the naval construction of the Astilleros de Guarnizo and for recognizing his hard work, he was conferred the title ” Count of Isla” by the king. In the Middle Ages, Isla taken part in the religious itinery, the pilgrim route to Santiago de Compostela. Moreover, the route to Santiago de Compostela by the coast was the best knowned and most widely used.

The many hermitages were used to rest, relax, meditate and spiritual retreat for the pilgrims. The hermitages of San Sebastián, San Martin y San Roque are well-conserved and it is possible to see them.

There are some documentary evidences that proves the existence of a pilgrims hospital, called San Julian de Isla.

The edifice know today as the Council was built on the basis of this ancient hospital.

Property of Cultural Interest from 1991

Access
At the entrance of Isla from Arnuero,  located in the heart of the historal city center,  in the neighborhood where the parish church is.

Period
It was built at the end of the XVII century by D.Juan Fernández de Isla, who became the Archbishop of Burgos. Creator of the Astillero of Guarnizo and various industries en Cantabria, he became the illustrious character of the region under the reign of Fernando V.

Description
Declared Patrimony of Cultural Interest in 1991, the palace is located in the historal city center, next to the church San Julian y Santa Basillisa.
The palatial architecture from the XVII century is marked by the sobriety and simplicity of this size, demonstrating their nobility and lordship with the strength of its stone walls, setting well-carved stones or heraldic elements.

A big stone fence surronds the enclosure. The singular particularity is their interior courtyard, a veritable example of the beauty of this palace. Moreover, at this time and in the Cantabrian houses, it was a rare ocurrence.

In 1676 D.Juan Fernández was beshop of Cádiz, and after that he was archbishop of Burgos in 1680. During this years, he ordered the construction of this extensive palace and restored the parochial church for his funeral chapel.

Characteristics
The palace can’t be visited because  is a private property and is often closed.. But the tourist can walk along to admire the beauty of the landscape. 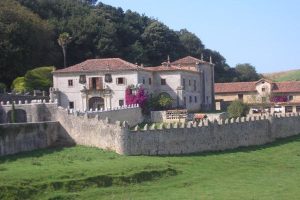 Declared as a Site of Cultural Interest, she dominates the surrondings of Isla.

This monument from the 18th century has already been called”The Catedral de las Siete Villas”, given that this is one of the best examples of column church of an open ground floor. Covered with starred rib vaults and a beautiful tower, is generally kept in interior with much luminosity. The decoration of the church is marked for the set of classical pilasters and the loopholes. With regard to the goods that this church hoards. It is necessary to emphasize the major altarpiece, which polychromy gives life to the sculptures and the most baroque reliefs, and the romantic organ of the 19th century. 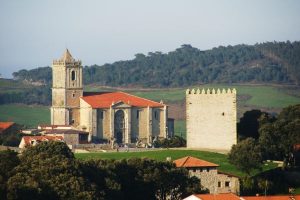 Symbols of feudal power, defense and origin of Isla’s lineage.

In the neighborhood of Hoyo, there is raised Jado’s tower, an infrastructure that takes us up to the medieval epoch.
This edifice is located in the high of a small hill, so we can admire a panoramic and impressive sight of Isla and the other two towers of the locality: the Novales Tower and the Cabrahigo Tower.

The Jado’s tower, still standing, reminds us the past of lordly fights that dominated these lands. His construction goes back to the 15th century, when this type of defensive fortifications turned into symbol of the feudal power. We have found some information about the Cabrahigo’s tower, popularly named as the Torrín,  that her construction goes back to the 14th century. His structure is of square plant, with four plants, which the façade has been  crowned with crenellated walls.

Although we don’t know who raised it, we know that one century later it was bought by Juan de Velasco, major waiter of the King.

Finally, from this inventory of defensive towers it is necessary to distinguish the construction of Novales. This infrastructure is attributed the origin of Isla’s lineage. 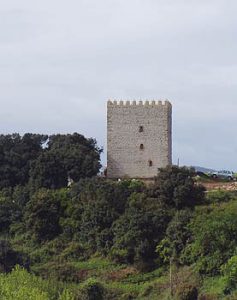